Even though majolica (or maiolica) has been around for over 500 years, the process remains the same in today’s manufacturing of Spanish, Mexican, French, and Italian ceramics in this style. There are five basic steps to create majolica:

With a process so labor intensive, how has majolica remained popular for so many years? Long before it was transformed by the Renaissance and became synonymous for Italian ceramics, the majolica process was used in 9th century Baghdad and Mesopotamia. The

technique made its way through trade routes and the port of Majorca to Spain and Italy, where it inspired local potters.

In the late 15th century and early 16th century fine Italian ceramics meant one thing only: majolica. The form was perfect for practical items like tableware and apothecary jars, mixing function and art with ease. Even more incredible was majolica’s role in social change: instead of people eating off common large wooden platters they now used individual dishes, often decorated with a family’s coat of arms. As you would imagine, dining customs and hygiene changed greatly as a result.

But majolica doesn’t stop there. Victorian majolica, manufactured in the 19th century in Britain and the United States, f 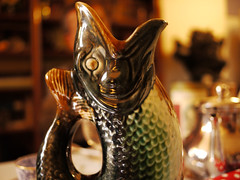 ollows the same process, though the glaze is different. Wedgwood and Mintons were major manufacturers, creating whimsical, creative forms for both decorative and daily use — everything from tableware to umbrella stands and candlesticks. The International Majolica Society is devoted to collectors of this exuberant period of majolica ceramics.

And today? Majolica continues its popularity in Spanish, Mexican, French, and Italian ceramics, combining tradition and modernity, as well as functionality and beauty. In fact, modern majolica shares many common motifs with Italian antique ceramics and Victorian majolica. Rooted in the natural world, both traditional and modern designs often depict flower patterns or raised shapes of fruits and animals, regardless of where or when they are made. It seems clear that the timeless beauty and durability of majolica continues to make this painstaking process well worth the effort.

One of a Kind Link

One of a Kind